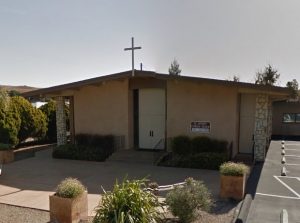 The oldest Catholic community in the Los Alamos area was no doubt made up of the Chumash Indian families who maintained the livestock herds for the Franciscan Padres at their Rancheria de Los Alamos, around the years 1800-1820. These Chumash families had been baptized at the Mission La Purisima.

After the missions were secularized in 1834, Jose Antonio de la Guerra received the land grant of the Rancho de Los Alamos. The Chumash soon died or moved away. The diocesan priests who had taken over the mission at Santa Inez ministered to the Catholic families (Felez, Ramirez, Hartnell, de la Guerra and Arrellanes) living on the new ranches of the region.

In 1879, John Bell and J.B. Shaw from San Francisco founded the town of Los Alamos. More settlers and businesses moved in, especially after the line of the Pacific Railway had reached Los Alamos. The Methodists opened the first local church in the early 1880’s.

The year 1905 was a milestone for the Catholic communities in Los Alamos, Guadalupe, and Santa Maria. In that year Fr. Mathias Ternes was appointed as the first Catholic pastor responsible for these three towns. While St. Mary of the Assumption Church was being constructed in Santa Maria, some residents of Los Alamos transformed a house into a little mission chapel. It was here on November 19, 1905, that the first Mass and Baptism were celebrated. It is not known why St. Anthony was chosen as the patron saint.

In 1911, the pastor of Santa Inez was charged with the responsibility for St. Anthony’s congregation. Two years later it was assigned to La Purisima Parish in Lompoc, and in 1936, back to St. Mary’s. It remained part of that parish until St. Mary’s was divided upon the formation of St. Louis of Montfort Parish in 1963. Fr. McCabe, the first Pastor of St. Louis, was also given the responsibility for Los Alamos and Sisquoc.