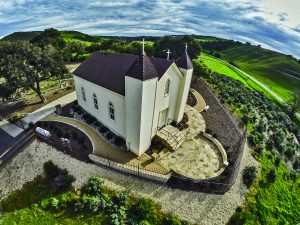 Silhouetted against the sky and varicolored hills is a little white church with two steeples, a cross atop each, and a third cross gracing the gable over the front entrance doorway. This is the historic Sisquoc Church, along Foxen Canyon, that on April 30, 1967, was dedicated as Santa Barbara County’s first historical landmark.

William Benjamin Foxen, an English merchant ship captain, married the dark eyed Eduarda de Carmen Osuna on May 26, 1831. In 1842, he was granted the 8,874 acre Rancho Tinaquaic. One of their daughters, Ramona, met an attractive young Englishman, Frederick Wickenden. They completed a second adobe and opened a store and stage stop. The adobe is the Wickenden home even today; additional acreage was purchased from the government by Wickenden in 1872, including the land now occupied by the church and the cemetery, all north of the original land grant.

The whole community in that area badly needed a convenient place where church services could be held and children could receive proper religious instructions without the long journey to Mission Santa Inez – the closest church. Inspired by the plans of Rev. McNally of the Mission, Frederick Wickenden, Thomas Foxen and Chris Lawson are thought to have done most of the work in building the little church that, completed in 1875, was consecrated as the Chapel San Ramon. Services were held once a month by a priest from either Santa Inez or Arroyo Grande.

By 1908, church attendance began to fall off; and by 1910 only funeral services were held at the church when some member of a pioneer family was laid to rest. Better roads and automobiles now made Mission Santa Inez and the new St. Mary’s Catholic Church in Santa Maria easier to reach. The life of the chapel seemed to have ended. The ravages of time and vandalism in the decaying structure brought concern to the community and family. A project to restore the historic landmark was started in April of 1958 with Winston Wickenden as chairman. In May 1959 the committee reported the restoration work completed through many contributions of money, material and labor from interested individuals, firms and civic organizations. Following action by the County Landmark Advisory Committee the Santa Barbara Historical Association and the Santa Maria Historical Society, on July 5, 1966, the Santa Barbara County Board of Supervisors approved the Sisquoc Church as the first historical landmark under County Ordinance #1716, enacted for historic preservation.

Citizens formed the San Ramon Chapel Preservation Committee. Lighting was installed in 1972 and a chain link fence put up in 1974. On Sunday, August 31, 1975, on the Chapel’s 100th Anniversary, Mass was celebrated by Father Bertin Foxen, great-grandson of Benjamin Foxen. More than 200 people attended services dedicating San Ramon as a state historical landmark.

Currently, weekly Sunday Eucharist with parishioners living along Tepusquet Canyon or Foxen Canyon Road is presided over by a Josephite priest from St. Louis de Montfort Church in Orcutt. The future of the chapel on that hill in the Sisquoc River Valley near Santa Maria now seems more secure.