The history of St. Louis de Montfort Catholic Church officially began on March 22, 1963. The Archbishop of Los Angeles, Francis Cardinal McIntyre, seeing the ever-increasing growth in the Orcutt-Santa Maria area, divided St. Mary’s parish into two parts. St. Louis de Montfort was the name given to the southern part, extending north to Betteravia Rd., and south to Los Alamos; from Black Rd., and Highway 1 on the west across the valley to the Cuyama Hills in the east. Fr Vincent McCabe, Associate Pastor at St. Mary’s was named the first pastor of St. Louis.

Until the planned facilities on Clark and Harp could be built, Fr McCabe conducted services in an old airport mess hall at Goodwin and Industrial Roads. In January of 1964, an 8-classroom grammar school was constructed. Services were then move d over to the School, using the present 6th, 7th and 8th grade classrooms for a Church. In September of 1964, the school opened for grades 1-4 and gradually built up to an eight-grade curriculum. The school was staffed then and now by the Daughters of Mary and Joseph.

A 10-acre site on the corner of Clark and Harp was purchased and groundbreaking ceremonies for the actual church were held in March, 1964. The first Mass in the new Church was conducted January 30, 1966 by Rev McCabe. The Church and school were simultaneously dedicated by Cardinal J. M. McIntyre on- February 4, 1968. The first Associate Pastor, Rev Edmond Renehan came in 1966 and remained until 1969. Between 1965 and 1975 St. Louis de Montfort was built into a functioning, thriving parish. In 1975, Fr. McCabe was transferred to San Roque. Fr McGovern, an archdiocesan priest, was sent to replace Fr McCabe; however, he resigned due to :ill health in 1975.

Fr Anthony Runtz, a Josephite Father, was made-Pastor in 1975. The Josephite Order then petitioned the Archdiocese for permission to take over the parish duties. It was granted, and the Josephites have staffed St. Louis parish ever since.

Many changes and improvements took place at St. Louis under Fr Anthony’s administration. In 1977, a parish hall was built and named after Mildred Jeffers, longtime parish housekeeper. In 1980, the Rectory was built and the school playground was finished. The Parish Council was reformed and the Eucharistic Ministry was established. Parish renewal and Pre-Cana programs were also formed.

In 1980 St. Louis was given the special privilege of celebrating the ordination of Fr. Michael Biewend, the-first ever to take place in the Santa Maria-Orcutt area. Since then, we have been honored with two more Josephite ordinations, Fr. Tom Elewaut in August 1986, and Fr. Ed Jalbert in August 1987.

In 1985, Fr. Guillermo Garcia was named pastor. With Archbishop (now Cardinal) Mahoney’s arrival in the Archdiocese, the idea of convocation has grown. St. Louis held its lst Convocation Fair in 1987. This was the beginning of many on-going pastoral projects. Fr. Garcia left in 1990 to serve as Superior General of the Josephite Order. Fr. Mark Newman, former principal of St. Joseph High School, succeeded as pastor in the fall of 1990. In the fall of 2001, Fr. Charles Hofschulte, former Principal at St. Joseph High School succeeded Fr. Mark and is currently pastor at St. Louis de Montfort..

As the Orcutt area continues to grow, St. Louis will, as “One Family in Christ,” grow with the area and strive to meet the many needs of our community.

A Trip Down Memory Lane

The new church and school of St. Louis de Montfort, one of the largest parishes territorially in the Archdiocese, will be dedicated at 11 a.m. this Sunday, February 4, by His Eminence James Francis Cardinal McIntyre.

The church and school are at Clark Avenue and Hope Road in the unincorporated Orcutt area just south of Santa Maria.

Approximately 85 percent of the 625 St. Louis families derive their livelihood from the Vandenberg missile base, according to Father Vincent McCabe, pastor.

Fr. McCabe will be celebrant of the Solemn Mass of dedication this Sunday. Fr. Francis Reilly of Compton will deliver the sermon.

The parish choir will sing.

St. Louis Church seats 1000 persons. It is a simple, concrete masonry structure of contemporary design. The sanctuary extends into the nave, with transepts on either side.

The main altar of imported marble is located in the center of the sanctuary, allowing the celebrant of Mass to face the congregation.

The crucifix above the altar, stations of the cross and statues are Italian wood carvings.

The eight-classroom parish school also is of concrete block construction. In the present term 271 pupils are enrolled in the first six grades. The school, which opened in 1964, is conducted by Daughters of Mary and Joseph. 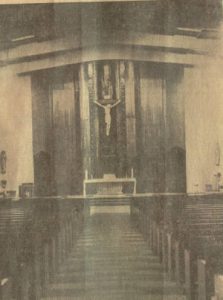 St. Louis parish was established in March, 1963. During its first year, Masses were celebrated in a rented Army mess hall at Santa Maria Airport. Services were held in the parish school from September, 1964, until completion of the church two years ago.

Near Sisquoc is northern Santa Barbara County’s oldest church, the Foxen Memorial Chapel, recently dedicated as an historic landmark. The Catholic chapel was built in 1878-79 by pioneer ranchers – Foxens, Wickendens and Lawsons. It no longer is sued for services.

Contrasting with the nearly 100-year-old chapel is the space age Vandenberg base, a parish, or group of parishes, in itself. Nine Masses are celebrated in the base’s four Catholic chapels each Sunday.

Serving Catholic servicemen and families on the bast base are three military chaplains, one full-time auxiliary chaplain and a fifth priest who assists o Sundays. 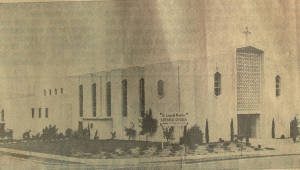 Most of the nearly 20,000 civilians employees at Vandeberg live off the base, many of them in St. Louis parish. Because of the nature of their work, few become permanent residents.

Fr. McCabe estimates that he has a complete turnover of parishioners every three years. Except for a nucleus of about 50 families – most of them farmers – a third of his parishioners move out every year and are replaced by others.

“In one year we lost three presidents of our women’s council and two men’s club presidents,” he said.